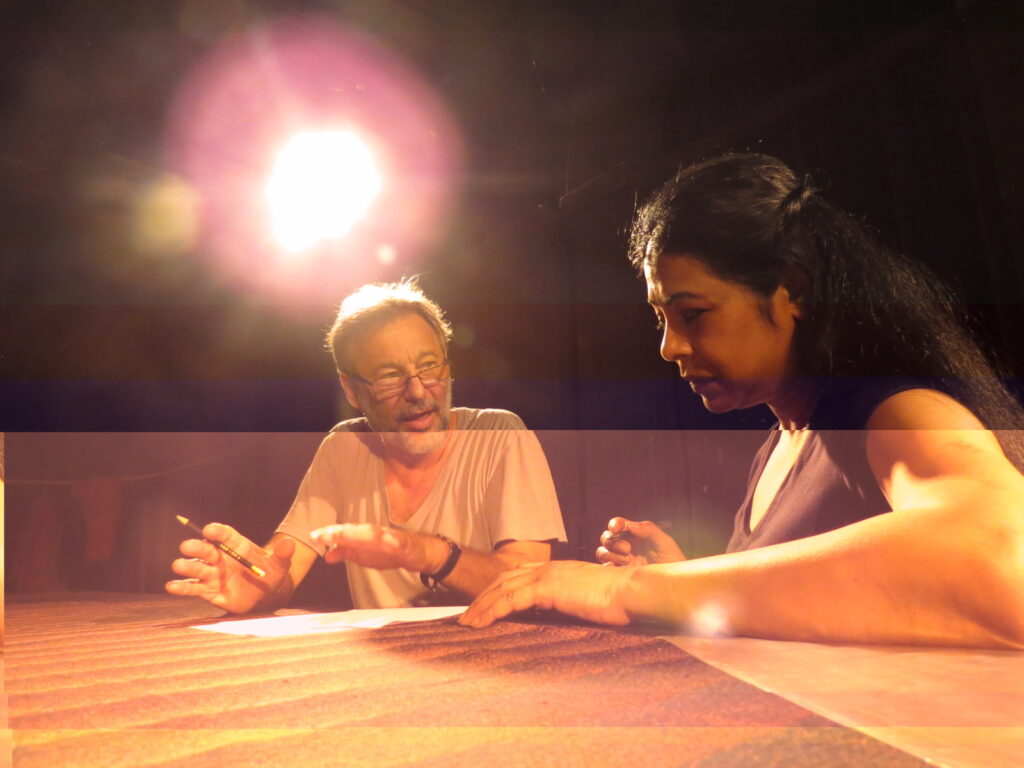 Synopsis: The plot revolves around an unhappy marriage and the tragic event of losing two children following the  burning down of the ancestral home, a ruthlessly ambitious man who built his career at the expense of the lives of others, now facing an age crisis with all its emotional consequences, feeling under threat by the upcoming generation. Here we have the story of a man who, having exploited others— particularly women—all his life, is now driven to destruction by a rebounding female energy.

Note on translation: When we (me and Yana Sistovari) came close to narrowing down our choice, we had two translations of The Master Builder – Eva le Gallienne (1955) and Michael Meyer (1961). Eva le Gallienne is more elliptical. I chose her text for the production as it is more poetic and consonant with  rhythmicality.

The element of music: There would be several musical interludes with music as  an important element in the play. I intend to have musicians playing traditional music live on the stage. The concept for the music is the Fantasies, Preludes, Nocturnes… taken from Chopin (playback) arranged with live sitar and tabla.

There is a story and a meta-story.

Looking at the plot, one could enter the territory of Hitchcock . For me, however, what is important is the following:

First, the economy of words in the Ibsenian short dialogue phrasing—a pre-Becket form—which leaves a lot of space for interpretations suited to different times and cultures.

Secondly, the never-ending wars between old and young, between men and women.

Thirdly, the force vitale—or, rather, the force fatale—which drives some characters beyond their limits.

The focus of my interest lay in Ibsen’s obsessions—not only those explicitly revealed in the lines of the text, but also mainly what can be read between the lines—what I have elsewhere called the ‘Hidden Territories’.  There we find many surprising aspects of Ibsen such as, for example, unexpected bouts of humour.

Now, about the element of set design: I would like the set to perform in its own right and to evoke playfulness. There is a long list of the effects that I wish to create indicating that everything is precarious. For example, a table leg faltering, furniture collapsing.

The doors, so important for Ibsen himself are, in my performance, intended to play a more symbolic role—they represent the passageway between two realities: the here- and-now and the worlds beyond.

I have four weeks to transfer the entire concept onto the stage! Without previous preparation! Even not fully four weeks—under ‘live or die’ conditions. Lets see who will fall off Solness’s tower…

Last but not least; I would like the Indian audience to read what I found in Ibsen and what I believe in, which is that our so-called rational approach to human behaviour is skin-deep because below the surface our rationality we are driven by uncontrollable passions and emotions.