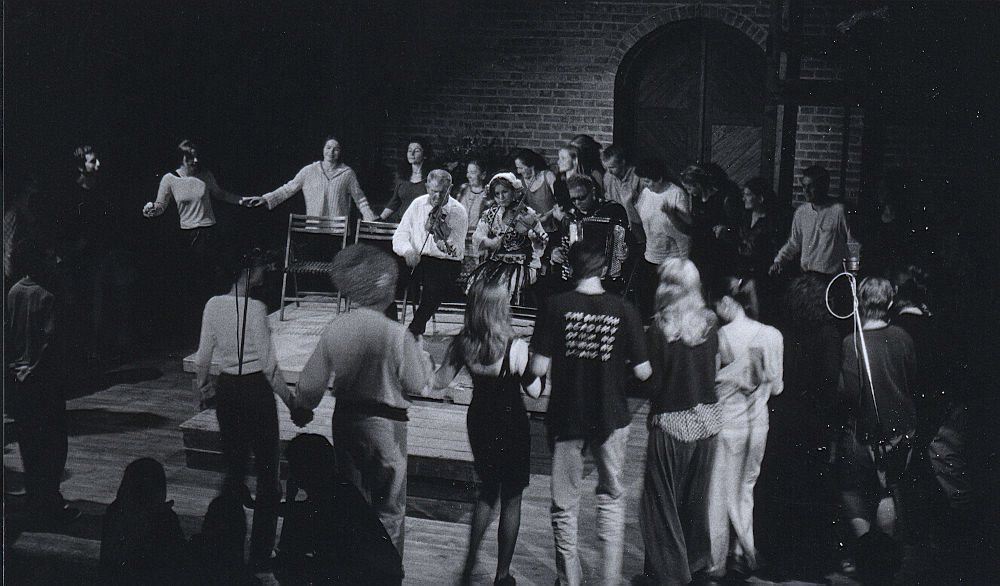 7-13 August 2000, at the premises of the Centre for Theatre Practices GARDZIENICE

The invited groups presented a globally unique art of singing, dancing and playing instruments. Slobodan Markovic Group performs old Wallachian ballads, epics and love songs sung to the accompaniment of violins, transmitted orally by teachers specialized in the genre. Members of the Markovic Group are instrumentalists, dancers and singers at the same time. They all belong to the Wallachian (Aromanian) minority in Serbia, cultivating their archaic traditions with great care.

High Singing Group is a group of singers performing traditional polyphonic ritual songs of melodies based on the characteristic dissonances and callings. They will be accompanied by Naum Strandżev – multi-instrumentalist and singer, a representative of the Muslim tradition of music using original melismas.

Both groups, apart from performing concerts and participating in the Cosmos of GARDZIENICE, led the singing and dancing workshops for students of the International Academy for Theatre Practices.
Workshops and performances were supplemented by lectures on aural traditions and ordinances of the Vlachs, literature and music of traditional Bulgarian culture, analogies between ancient and contemporary traditional culture in the Balkans.

The project Balkan Nights was completed with the support of the Stefan Batory Foundation, (as a part of the programme the Art Without Borders), Foundation of the Culture, the Swiss Cultural Foundation Pro Helvetia.