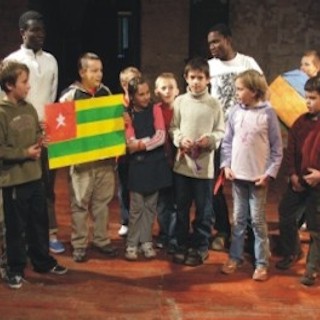 Program for children from Gardzienice and the nearby villages

a series of educational and artistic meetings in 2006-2008

We are making a film are practical activities where children learned the secrets of the film making and produced their first short film.
The workshop began with a surprise screening of the film on the big screen and introducing the children to the world of film stories. Then the filmmaker – Jolanta Sikorka talked about the production of the film from a technical side (work with the camera, set design, outdoor and studio) and Ewa Zielinska and Ewa Wozniak presented various functions in the film and the responsibilities of the director, actor, cinematographer, lighting technician, sound technician, set designer and so on. Then the children were divided into three groups and worked on the arrangement of the history of the film (the screenplay), and saving it in the form of a storyboard. After developing an action plan and dividing the individual roles the children started the actual filming. After recording, which was edited directly on the camera, there was the premiere of the individual films. Parents and teachers from primary schools in Gardzienice, Piaski and Stryjno were invited for the final show.

This time, at the invitation of the Theatre GARDZIENICE and New Zealand Embassy, we hosted a group  Manaia from New Zealand, who took the children for an exotic journey through the culture of New Zealand. As part of the activities the children met the indigenous people of New Zealand – Maori, their traditions, customs, history and immensely rich wildlife from New Zealand. Members of the group Manaia taught children the traditional songs, dances, working with poi’ami (balls on strings) and the martial arts of Maori warriors. The biggest attraction of the workshop proved to be the Maori face tattoos and a war dance haka that children performed during the final presentation for parents. The workshop ended with a group performance Mania for children and parents. Classes were held on 1 June 2007 in the Copernicus Primary School in Piaski and 2 June at the Centre for Theatre Practices GARDZIENICE.

Theatre Marathon was the final project for the children in the 2007 school year. Each of the invited schools had the task of presenting a group of young artists who wanted to show their talents on stage as actors, comedians, singers, or dancers. Participants prepared for the performances very conscientiously, and during a three-hour artistic mishmash showed, among others:

Marathon was finished with a big football match and a bonfire. Everyone had great fun.

It was a two-day summer project, during which the students of the VI Academy for Theatre Practices GARDZIENICE led integration, theatre, music and acrobatic activities preparing primary school children from Nowe Chojno, Gardzienice, Piaski and Stryjno to create a scene from the student performance called the Small Iphigenia.
The work on the first day had a character of simultaneous workshops. Each child could go from one workshop to another and try all the disciplines. On the second day the children were asked to select one of the disciplines, such as music for example, and work on improving their skills and building a part of the scene from the performance. Each group of students worked on their part, under the supervision of the students of VI Academy for Theatre Practices, which was later merged with the parts of the other groups. After putting all the elements together a very dynamic and musical scene was created. Children presented it as their final work.
The workshop ended with a performance of Small Iphigenia presented for the children by the students of the VI Academy for Theatre Practices GARDZIENICE.

September 3rd, The summer holidays are over

On the occasion of the beginning of the new academic year, students of the VI Academy for Theatre Practices invited the children, their teachers, guardians and parents, to two performances of Small Iphigenia.
Children and teachers from the Suchodoły Primary School and the Primary School of Gardzienice were present.

The workshop was devoted to work in small groups on the scenes from theatre play for the children. Each of the scenes were then shown one after another and formed a whole performance called the ELEPHANT FELL INTO THE CABINET.
Children first met in a large group for a short integration activities, and then they were divided into four smaller groups before they started the work. Each subgroup had one supervising person who guided the children and taught them various work techniques. Children created a scene from scratch and therefore they had to decide on the roles of each participants. It was a very busy workshop, full of surprises, quick group decisions and great fun.
At the end, the children presented final results of their work in a performance The Small Iphigenia. The performance, showed to the parents and guardians, was played on the stage of the GARDZIENICE Theatre.
On the first day children from Chojno Primary School took part in the workshops, on the second day –the children from the Primary Schools in Gardzienice, Piaski and Stryjno. Workshops were led by Ewa Zielinska, Ewa Wozniak, Małgorzata Grab and Kinga Sawicka.